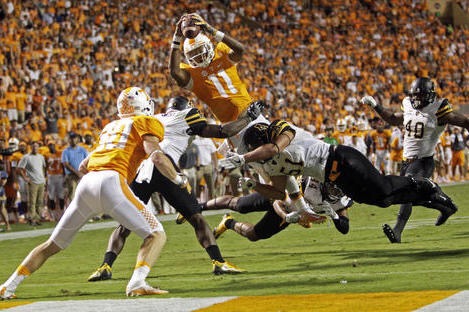 College football is back and in thrilling fashion as Tennessee and Appalachian State went into overtime in their first game of the season Thursday night.

Tennessee’s Jalen Hurd made the move that would win them the ballgame, recovering a fumble by the team’s quarterback for a touchdown that would give them their first, and only, lead of the night.

Taylor Lamb tried for an end zone pass, however Micah Abernathy broke up the pass and ended the night.

The win came after several mistakes made by Appalachian State, who went scoreless in the second half of the game, were capitalized on. The Tennessee Volunteers took advantage of poor clock management and missed opportunities, which included a missed field goal and a touchdown extra point.

Despite trailing for the entire game, Tennessee’s big break came when Josh Malone ran in a 67-yard touchdown pass in the 4th-quarter to tie up the game. That gave them everything they needed to force overtime at Neyland Stadium.

Tennessee made first downs that allowed them to move down field and score. Dobbs stretched for the goal line before a hit in the chest caused the ball to escape from Dobbs hands. Hurd recovered for the touchdown.

Appalachian State failed to tie the game that resulted in Tennessee’s 20-13 victory.