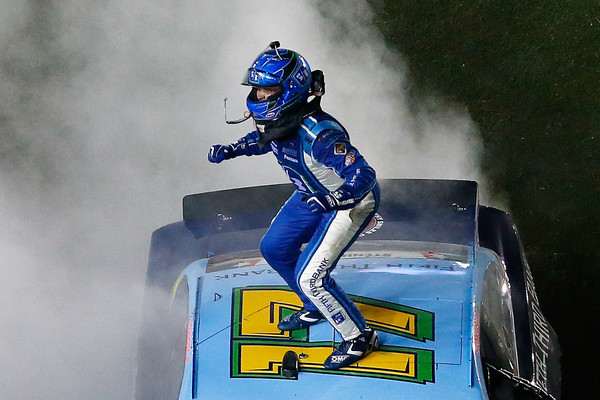 When the Monster Energy NASCAR Cup Series rolled into Daytona International Speedway Ricky Stenhouse Jr. wasn’t one of the most talked about, despite his win at its sister track Talladega two months ago. But he was the one with all the glory Saturday night.

Stenhouse propelled himself to victory in overtime to earn his second career victory this season. A feature no one could have predicted, but everyone can appreciate.

Stenhouse started beside David Ragan on the restart after a incident involving Denny Hamlin and Erik Jones brought out the caution. Ragan gained the lead, but Stenhouse quickly made his way to the front for the top spot.

“I was really having to lift a lot to keep from running over the cars in front of us,” Stenhouse said. “Even when I was leading, I could run not-full-throttle and be able to keep them at a certain distance. … I was pretty surprised with our damage that we were able to stay up front that last lap and a half.”

Stenhouse won the Coke Zero 400 in a brand new car that Roush Fenway built for him. The car that he won with at Talladega was gifted to Stenhouse by team owner Jack Roush for his first career MENCS victory.

Stenhouse is one of five drivers that have multiple wins this season. He sits 16th in the standings with nine races to go in the regular season.

The race was plagued with several multi-car accidents that left many of the favored contenders with finishes of 20th or worse.

Dale Earnhardt Jr. was involved in a wreck on Lap 52 after he felt one of his tires was losing air. That turned out to be a false alarm, however he made contact with Paul Menard and was two laps behind the leaders.

Earnhardt just received the free pass before being collected in a crash after a blown tire sent the No. 4 of Kevin Harvick spinning. Stage 1 winner Brad Keselowski was also involved, ending his night with a finish of 31st.

In the chaotic night the top 10 finishers of the night were practically unrecognizable. Paul Menard, Michael McDowell, and Xfinity Series regular Brendan Gaughan all claimed finishes inside the top 10, with BK Racing’s Corey Lajoie just outside in 11th place.

The Monster Energy NASCAR Cup Series head under the lights again at Kentucky on July 8, 2017 at 7:30 p.m ET.