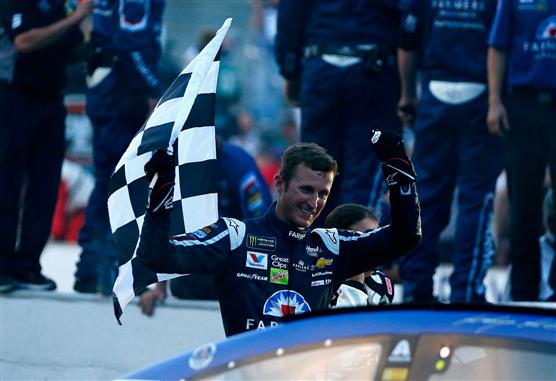 A long day in Indianapolis, which included a red flag delay for rain and two others for incidents, ended with Hendrick Motorsports’ Kasey Kahne in Victory Lane.

Kahne snapped over a hundred race winless streak for the Brantley Gilbert Big Machine Brickyard 400 in overtime after battling with Brad Keselowski for his 18th career MENCS victory.

“The career is big, for sure—but the win and the history here,” Kahne said. “To win at this track is unreal. We used to always be really close. We lost to Jeff (Gordon) and we lost to Tony (Stewart); just some fast cars back then.”

Kahne may not have had the fastest car, but he delivered through a series of crashes that left the driver of the Farmers Insurance Chevrolet with exhaustion and some cramps at the conclusion of the extended event.

“Today, strategy got us here. This Farmers Insurance Chevrolet was great once I got out front. I just had to get there. I’m exhausted. But, an unbelievable win. The team just kept working. We had great pit stops.”

Kahne received the lead after a multi-car crash involving Clint Bowyer, Kurt Busch, and Erik Jones brought out the tenth caution of the evening. Kahne, who pitted one lap earlier, had fresh tires and opted to stay out for track position.

Keselowski acquired the lead on the restart, but his run was cut short when the No. 6 of Trevor Bayne spun on the frontstrech and collected a half dozen cars along with him.

Keselowski elected for the top on the restart, but Kahne persevered through the dry oil to get ahead of the Team Penske driver.

“Well, the one before just didn’t work,” Kahne said, “Everything went wrong. On the final one, everything went right. And once I got to Turn 1, I had good power and was able to clear him off (Turn) 1. I’m exhausted. And, it’s pretty crazy.”

Two-time Brickyard 400 winner Kyle Busch finished 34th after securing Stage 1 and Stage 2 wins. The Joe Gibbs Racing driver was involved in a Lap 111 wreck with Martin Truex Jr. that put their chance at history to an end.

Dale Earnhardt Jr. was eliminated after contact with Bayne on Lap 77 left him with damage to his radiator.

“There was just a bunch of cars slowing down, starting a chain reaction. We got into the back of (Bayne),” he said. “It just knocked the radiator out of us. We had a great car. We had a top-10 car. I thought we could finish there.”

Only four playoff spots remain open with six races to go in the 2017 regular season. The Monster Energy NASCAR Cup Series head back to Pocono, where Chris Buescher is the defending race winner.