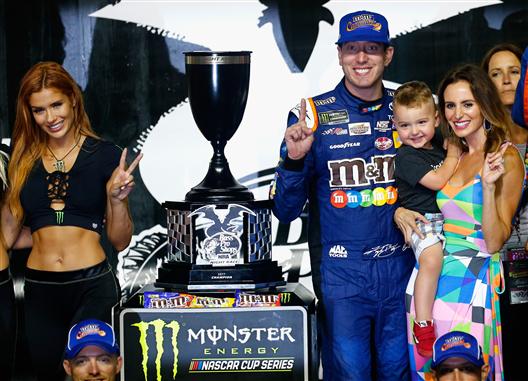 Rowdy Nation rejoiced while everyone else showed their displeasure as Kyle Busch done his signature bow after winning the Bass Pro Shops NRA Night Race at Bristol Motor Speedway.

Busch led 156 laps and held off a charging Erik Jones for his third win of the weekend. Busch competed in, and won, both the Truck Series and Xfinity Series races at the half-mile track.

“Man, Erik Jones put up a whale of a fight,” Busch said of the 21-year-old Furniture Row Racing driver. Jones led the most laps and battled with Busch through lapped traffic, before falling into second place. Jones held onto the position while charging to get closer to the No. 18 Toyota Camry.

But Jones was left with the best finish of his Monster Energy NASCAR Cup Series career.

“You don’t want to sound like you’re whining or being a sore loser by saying it sucks to run second, but it’s a bummer,” said Jones, who started on the pole and led 260 of 500 laps before posting a career-best finish. “It hurts. You know, you want to win every race you’re in. This was the first shot that I really had to come really close to it in the Cup Series.”

Busch regained the lead on Lap 445 as Jones and Kenseth got behind lapped traffic. The win is Busch’s second victory this season and 40th of his career, tying NASCAR Hall of Fame driver Mark Martin. Busch is also the only active driver to win six races at Bristol.

Trevor Bayne finished sixth for his fourth top-10 finish of 2017.

Chase Elliott remains 14th in the playoff standings, 69 points to the good, after finishing in the 18th position. Elliott was involved in a crash on Lap 396 with Kevin Harvick, Ty Dillon, and Aric Almirola.

The Monster Energy NASCAR Cup Series head to Darlington Raceway for the Bojangles’ Southern 500 on September 3, 2017 for the third annual throwback weekend.

Multiple drivers including Dale Earnhardt Jr., Clint Bowyer, and Danica Patrick are set to race paint schemes to honor drivers of seasons past. The celebrated time period of the 2017 season is 1985-1989.

Don’t miss the thriller in two weeks on September 3rd at 6 p.m ET on NBC Sports.