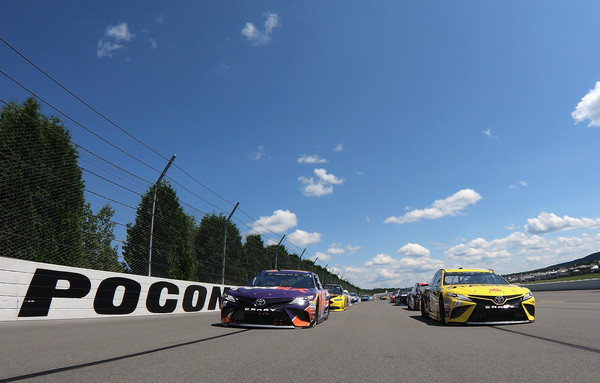 The Monster Energy NASCAR Cup Series returned to Pocono Raceway, where the “Big 3” continued their dominance, with Kyle Busch taking the checkers and earning his sixth victory of the season.

Ironically, none of the Big 3 make this week’s Top 5, but two of Busch’s teammates do.

Two Hendrick Motorsports drivers along with a Richard Childress Racing driver are featured below.

No. 1 Daniel Suarez – Daniel Suarez earned his second top five of 2018, finishing in the runner-up position after leading 29 laps in the Gander Outdoors 400.

Suarez earned stage points in Stage 1 with fifth and gained 22 positions from his finish at the 2.5-mile track in early June.

Suarez is 20th in the point standings, 491 points behind leader Kyle Busch and 40 points from Ricky Stenhouse Jr. and Paul Menard, who are tied in the cutoff position in 16th place.

Byron earned stage points in Stage 2 with a 10th place finish. The Hendrick Motorsports driver held an average position of 14th throughout 400 miles.

Byron is 21st in the point standings, 501 points behind Busch and 50 points from Stenhouse and Menard.

Bowman earned stage points in Stage 1 (ninth) and Stage 2 (fourth). He had an average position of ninth and was 13th midway through the event.

Hamlin is ninth in the point standings, 273 points behind his teammate and 59 points away from fifth.

No. 5 Ryan Newman – Ryan Newman finished eighth on Sunday, earning him his sixth top 10 of the season.

Newman failed to earn stage points, but ran as high as seventh with an average position of 15th.

Newman is 18th in the point standings, 483 points behind Busch and 32 points from the cutoff position.

Notables: Bubba Wallace finished in 33rd place after crashing out on Lap 154. Wallace went sliding through the grass at the end of the frontstretch before slamming his No. 43 Chevrolet into the outside wall.

Wallace did not lower his window net down immediately, but finally climbed from his car and sat on the asphalt before climbing into an ambulance.