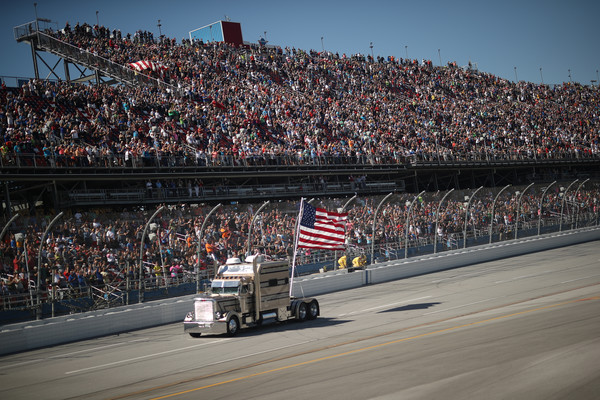 The second round of the Monster Energy NASCAR Cup Series Playoffs took place in Talladega, Alabama, where the winner was decided in overtime.

Two teammates are featured in this week’s Top 5, along with three drivers who earned or matched their best finish of the season.

Almirola led the final lap in overtime to earn him his second career victory, passing teammate Kurt Busch for the win after his fellow teammate ran out of fuel on the final restart.

Almirola earned stage points in Stage 1 and Stage 2, with a fourth place finish in each segment.

The Stewart-Haas Racing driver earns a place into the next round of the MENCS Playoffs with his victory. He is fifth in the standings, 41 points behind leader Kevin Harvick.

Bowyer ran alongside his teammates in a near perfect strategy that dominated the field throughout 500 miles at the 2.66-mile track.

Bowyer is sixth in the standings, 42 points behind Harvick and one point behind Almirola.

No. 3 Regan Smith – Regan Smith earned his first top 10 since earning third at Pocono Raceway in August of 2016.

Smith, who will be finishing the year in the No. 95 for the sidelined Kasey Kahne, ran as high as sixth.

How will Smith perform next week at Kansas? He has one top-10 finish at the 1.5-mile track, a seventh place result in 2012 racing for Furniture Row Racing.

Gaughan led one lap on Sunday on Lap 139. His average at the super speedway was 24th.

The finish is Gaughan’s best since earning a top five more than a decade ago.

No. 5 Trevor Bayne – Trevor Bayne earned his fifth top-15 finish of the season on Sunday, finishing the event in 13th place.

Bayne will be back in the No. 6 Ford for his 20th race this season at Kansas Speedway. In seven starts, he has one top 10.

Notable: Ricky Stenhouse Jr. earned his third top-five finish of the year, and first since finishing fifth at Talladega in the spring. He finished third on Sunday. His other top five came at Bristol in the spring.