Clint Bowyer snapped a winless streak that spanned almost six years, dating back to October of 2012, on Monday, March 26th, after an overnight snowstorm on Saturday caused the STP 500 at Martinsville Speedway to be delayed by one day.

Bowyer led 215 laps before earning his ninth Monster Energy NASCAR Cup Series victory of his career, ending a drought of 190 races without a win. The victory is also the Stewart-Haas Racing driver’s first at the .526-mile track.

“We learned last year,” Bowyer said of the 2017 season, his first season with SHR after co-owner Tony Stewart retired from NASCAR competition. “Obviously, Harvick came on strong at the end of last year, but it was a learning year for our team and the 14 bunch.”

Bowyer won by a 1.146 margin-of-victory over runner-up Kyle Busch, who gained the points standings lead from Martin Truex Jr. by eight points.

“We just tried to maintain and keep ourselves in the right position, in the right spots all day long on the long runs and save our stuff as much as we could to see if we couldn’t mount a charge late in the going,” Busch said.

But it wasn’t enough for the 32-year-old. Busch finished second for the third time in the last four races after leading 24 laps.

Ryan Blaney, Truex, and Kevin Harvick rounded out the top-5. Blaney led 145 laps and earned the Stage 2 victory before bringing his Menards / Libman “Cleaning Since 1896” Ford to a third place finish.

“It was a good showing for us, for sure. I think the track tightened up a good bit there towards the end and we just got a little bit behind. Congrats to Clint for winning that race.” Blaney said, “It was fun racing with him for a bit, but for us to come out of here and lead a bunch of laps, win a stage and run third here at Martinsville – where I usually run terrible – that says a lot about this team and the preparation that they did getting ready for this race. That’s nice to have, we just need to be a little bit better.”

The lone caution for an incident occurred on Lap 384 when the No. 1 of Jamie McMurray and the No. 3 of Austin Dillon made contact going into Turn 2. The contact caused McMurray to spin. McMurray later suffered a tire rub and was forced to pit. McMurray finished 26th, five laps down.

The Monster Energy NASCAR Cup Series have a week off for Easter, but return on Sunday, April 8th at Texas Motor Speedway. Jimmie Johnson earned his first victory of 2017 at the 1.5-mile track one year ago. Can he repeat again? Will a young gun earn a win? Or will someone earn their first career victory? 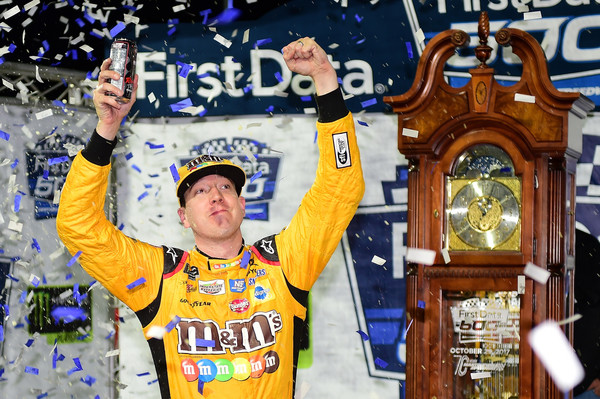 Kyle Busch won for the fifth time this season and the crowd booed, but not for the 2015 Monster Energy NASCAR Cup Series champion.

The chants were for Joe Gibbs Racing teammate, Denny Hamlin.

Hamlin was running second with three laps to go when he put the nose of his Toyota to the back of the No. 24 of Chase Elliott, spinning the driver and stripping him of his first career win.

The incident sent the First Data 500 into overtime and ended after a multi-car incident on the frontstrech. Busch beat Martin Truex Jr. to the line by .141 seconds, for the second time at “The Paperclip” and the 43rd time of his career.

The win earns Busch a place in the Final 4 for the third straight year.

“I wanted to get a better restart, pinch Denny down a little bit, but it actually kind of worked out better for me that he got ahead a little bit, gave me a gap,” Busch said. “I got down (to the inside lane), and he got into Turn 3 and just pushed up the race track and I knew I had to plug that hole right away cause I was just going to get beat on from behind,

“So I got up in there and rooted him out of the way a little bit, and we drag-raced down the front straightaway and deep into (Turn) 1, I just wheel-hopped, chattered the rear tires and it was sideways getting in there trying to calm it down with the brakes and everything else. Was able to get through there luckily somehow – I don’t know how – and beat Truex off of (Turn) 4 back to the start/finish line.”

Brad Keselowski finished fourth after leading 108 laps and securing both stage wins. Keselowski fell short of a victory after contact with Elliott sent the Team Penske driver up the track and out of contention for the win in the Round of 8.

Joey Logano finished in the 24th position after a tire rub sent the driver of the No. 22 spinning on Lap 492.

Elliott obtained the lead on the restart, but was pumped from behind by the No. 11 FedEx Walgreen’s Toyota of Hamlin.

Elliott showed his displeasure by engaging in a heated discussion with Hamlin on the backstretch, but remained poised in his remarks about the incident.

“I got punted from behind and wrecked in Turn 3 leading the race,” Elliott said. “I don’t know what his problem was. It was unnecessary. I hadn’t raced him dirty all day long. There was no reason for that, and he comes over and talks to me a second ago and tells me he had somebody pushing him into Turn 3.

“I thought that was funny, because there was nobody within two car lengths of him into Turn 3 behind myself. I don’t know what the deal was, but it is so disappointing. We had the best car I’ve ever had here at Martinsville. And had an opportunity to go straight to Homestead and because of him, we don’t.”

Elliott sits eighth in the Playoff standings, 90 points behind the leader and 26 behind Kevin Harvick, who holds the last seed into the Final 4 at Homestead.

The Monster Energy NASCAR Cup Series head to Texas Motor Speedway on November 5th. Who will be the next to earn their chance at the 2017 championship? Will a non-playoff driver play spoiler?