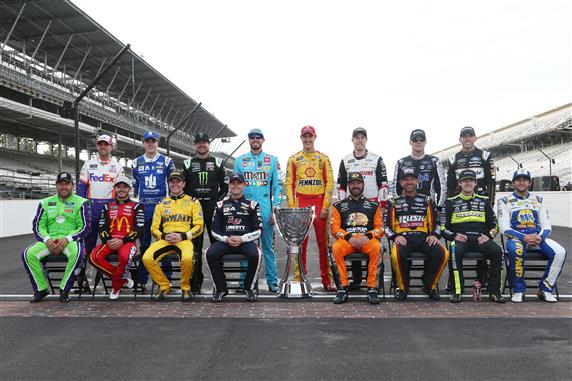 Four of this week’s Top 5 will be competing in the Playoffs to become this year’s champion.

No. 1 Bubba Wallace – Bubba Wallace earned his first top-five finish of the season during Sunday’s Big Machine Vodka 400 at the Brickyard, where he finished third.

Wallace battled back from an early accident on pit road. He ran as high as third and was no worse than 11th in the final 50 laps.

Wallace is 27th in the standings, 203 points behind Chris Buescher in 20th.

Byron failed to earn stage points in Stage 1, but earned them in Stage 2 with a ninth place finish.

He is tied with Aric Almirola in the playoff standings for 13th, 44 points behind leader Kyle Busch.

No. 3 Ryan Newman – Ryan Newman battled hard in the final laps to secure his position in this year’s Playoffs. The Roush Fenway driver finished eighth, securing the last seed in the championship field.
Newman avoided a crash on Lap 105. He earned stage points during Stage 1 (fifth), but failed to earn them in Stage 2.

He is 16th in the playoff standings, 45 points behind Busch.

Elliott failed to earn stage points at the 2.5-mile track, but ran as high as eighth.

The Hendrick Motorsports driver is seventh in the playoff standings, 27 points behind Busch.

Hamlin failed to earn stage points, but ran as high as fourth with an average position of 13th.

The Joe Gibbs Racing driver is second in the playoff standings, 15 points behind teammate Busch. 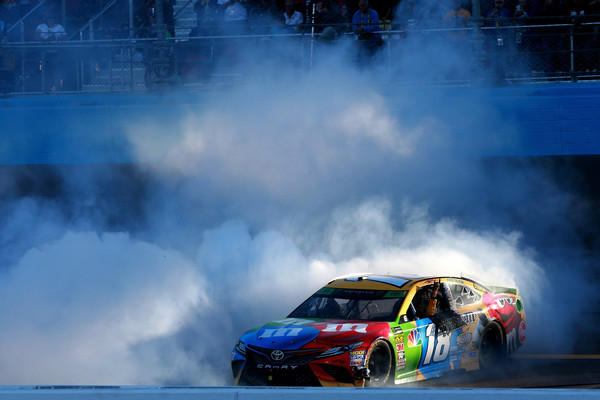 The Monster Energy NASCAR Cup Series Playoffs continued during the Can-Am 500 at ISM Raceway for the last race before a champion is crowned for the 2018 season.

2015 champion Kyle Busch earned his ticket into the Championship 4 next weekend at Homestead with his victory on Sunday. The Joe Gibbs Racing driver led 117 of 312 laps before earning his eighth victory of the season.

While the battle for the championship brought several heated battles for the final chance to advance, several drivers outside of the playoffs earned their best finishes.

Three veteran drivers are featured in this week’s Top 5, including a former champion who returned to competition on a part-time basis this season.

The finish is Wallace’s first top 10 since finishing eighth at Texas Motor Speedway in the spring.

The Richard Petty Motorsports driver ran as high as ninth throughout 312 miles on the one-mile track.

Can Wallace close out his rookie campaign with another strong finish? The 25-year old has two Xfinity and two Camping World Truck Series starts at Homestead-Miami Speedway, winning at the track in the CWTS in 2014.

No. 2 Matt Kenseth – Matt Kenseth earned his first top 10 of the year on Sunday since joining Roush Fenway Racing and splitting the famed No. 6 with Trevor Bayne for the season.

Kenseth failed to earn stage points, but ran as high as fourth. The veteran driver’s previous best finish of the season was 12th at Indianapolis.

He sits 32nd in the point standings.

How will Kenseth fair at Homestead in what may potentially be his last Cup start? In 18 starts at the 1.5-mile track, Kenseth has one win, four top-five finishes, and 10 top-10 finishes.

No. 3 Kyle Larson – Kyle Larson earned his 12th top five of the year at ISM Raceway, finishing in the third position.

Larson is 10th in the standings, 22 points behind Ryan Blaney.

Keselowski is eighth in the point standings, 11 points behind Chase Elliott, who is fifth.

Allmendinger failed to earn stage points, but ran as high as fifth while averaging an 18th place position on Sunday.

Allmendinger will be making his final start for JTG-Daugherty Racing next weekend at Homestead. In nine starts at the track, Allmendinger has one top five and three top-10 finishes.

Notables: William Byron clinched the Rookie of the Year Award after finishing ninth at ISM Raceway. It is Byron’s fourth straight win of the award, previously winning it in the K&N Pro Series East Series in 2015, Camping World Truck Series in 2016, and the Xfinity Series one year ago in which he won the series title.

Kevin Harvick, Martin Truex Jr., and Joey Logano will join Busch next Sunday, November 18th to battle for the MENCS title. Logano is looking to earn his first series championship. 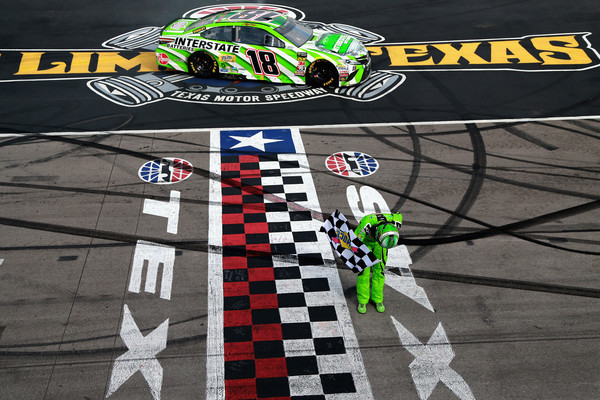 The Monster Energy NASCAR Cup Series returned from the holiday off weekend to frigid temperatures in Fort Worth, Texas.

One veteran avoided multiple wrecks and came from behind to earn his best finish since May of 2017, while another found Victory Lane.

Another young gun scored his best finish of the season, while the Rookie of the Year battle remains a close one.

No. 1 Kyle Busch – Kyle Busch’s run of top 5 finishes without a win came to an end in No Limits Texas, where the Joe Gibbs Racing driver held off Kevin Harvick for his first win of the season.

Busch, who is now tied with NASCAR Hall of Famer Bill Elliott on the all-time win list, led the most laps and secured the Stage 2 win before earning the 44thvictory of his MENCS career.

With the Texas victory, the 2015 NASCAR Cup champion extended his points lead to 38 points over Joey Logano and 51 points ahead of Ryan Blaney.

Will the momentum from this win carry into Bristol? Busch has six wins, nine top-5s, and 14 top-10 finishes at the half-mile track.

McMurray was only a couple car lengths ahead of multi-car wrecks during Sunday’s event. Avoiding trouble with the first caution on Lap 2 and again on Lap 179.

McMurray regained his lap on Lap 305, when the No. 31 of Ryan Newman brought out the eighth and final caution of the evening.

From there the Chip Ganassi Racing driver surged to the front, earning his best finish since placing second at Talladega last year.

No. 3 Erik Jones – Erik Jones earned his first top-5 of the season at Texas Motor Speedway, finishing fourth after leading 64 of 334 laps.

Jones gained one position in the point standings. He now sits in 11th place, 123 points behind leader Busch. He is nine points behind Kyle Larson in tenth.

No. 4 Darrell Wallace Jr. – Darrell “Bubba” Wallace Jr. looked like a new man on Sunday, coming from his 15th starting position to earn his first top-10 since finishing second in the season-opener at Daytona.

Wallace’s team used an off sequence pitting strategy to get the rookie of the year contender in contention. Wallace stayed out during the final caution that put the Richard Petty Motorsports driver restarting in the fourth position.

Wallace remained strong to earn an eighth place finish. He sits 19th in the point standings, nine points behind Rookie of the Year competitor William Byron and three points ahead of A.J. Allmendinger.

No. 5 Clint Bowyer – Clint Bowyer carried the momentum from his Martinsville win two weeks ago into Texas for a quiet but strong run at the 1.5-mile track.

Bowyer started in the third position and had an average position of seventh on Sunday. The Stewart-Haas Racing driver earned a sixth-place finish during Stage 1 and fifth at Stage 2.

Bowyer sits sixth in the standings after finishing ninth. He is 67 points behind Busch and one point behind defending champion Martin Truex Jr, who is in fifth.

Notables: In addition to McMurray and Jones, there were multiple drivers who scored their best finishes of the season at Texas.

Trevor Bayne recovered from a late-race crash to finish in the 12th position. His best since finishing 13th during the Daytona 500.

Pit guns remain a hot topic after issues with the No. 4 team forced Harvick to pit multiple times for loose wheels. Harvick, his crew chief Rodney Childers, and JGR owner Joe Gibbs all expressed their displeasure with the NASCAR mandated pit guns following the race.

Daniel Suarez injured his left hand after being involved in a crash on Lap 2 with Austin Dillon, Paul Menard, and Alex Bowman. Suarez finished 29th, 44 laps down

The 2018 NASCAR season kicked off to an incredibly start in the 60th running of The Great American Race at Daytona International Speedway.

An iconic number returned to Victory Lane after being pushed by another, while rookies and veterans alike were the victim of the Big One.

This week’s Top 5 most improved drivers earned their place by making impressive moves, improving their positions from a year ago, and leading laps and earning stage points.

No. 1 Darrell “Bubba” Wallace Jr. – The Richard Petty Motorsports driver finished a career high second in his first start in the Daytona 500. Wallace, who started seventh, remained up front throughout the event and became the highest finishing African American in the event. Wendell Scott held the previous record for his 13th place finish in the 1966 Daytona 500.

Wallace pushed Austin Dillon to the win Sunday evening and avoided the Big One, despite contact with Joe Gibbs Racing’s Denny Hamlin in overtime.

The RPM driver can take the momentum and confidence gained and apply it next weekend at Atlanta. Wallace has three Xfinity starts at the 1.5-mile track, his best finish is sixth from one year ago.

No. 2 Austin Dillon – Austin Dillon stated he doesn’t remember much about the 1998 Daytona 500, in which he stood in Victory Lane next to the late Dale Earnhardt.

The 27-year-old will have a reason to remember this year’s event in twenty years.

Dillon restarted fourth in an overtime finish, but gained the lead after making contact with Aric Almirola, which sent the Stewart-Haas Racing driver spinning.

The win is Dillon’s second in the Monster Energy NASCAR Cup Series. Dillon now holds victories in two of the four “Crown Jewel” events. Dillon won the Coca-Cola 600 in 2017.

Dillon has proven to excel under pressure of the famous No. 3 in recent years, earning eight top-5s and 18 top-10 finishes since 2016.

No. 3 Ryan Blaney – Ryan Blaney dominated by leading 118 laps and winning Stage 2. The newest driver of Team Penske came back to earn a seventh place finish despite sustaining damage in two multi-car wrecks.

Blaney heads into Atlanta, where he has an average finish of 21.5, as the points leader. Can he improve his results, and will it be enough to keep the points lead over teammate Joey Logano?

No. 4 Michael McDowell – Michael McDowell found a new home at Front Row Motorsports after losing his ride to Kasey Kahne at Leavine Family Racing, but he picked up right where he left off with another stellar performance at a restrictor plate track.

McDowell finished ninth in his 250th start. It is his second straight top-10 at Daytona and sixth top-10 of his career.

McDowell wasn’t in contention for the win at the end, but remained mid-pack for majority of the race. He was as high as fifth and secured stage points in Stage 1 (sixth) and Stage 2 (fifth).

No. 5 Chris Buescher – Chris Buescher last scored a top-5 in August of 2016, when he finished fifth at Bristol. The JTG-Daugherty Racing driver quietly climbed inside the top-5 Sunday to earn his best finish at the 2.5-mile track.

Buescher scored a top-10 during the 2017 Coca Zero 400. He sits ninth in the points standings, 25 points behind the points leader.

Notables: Justin Marks earned his best career finish at Daytona with 12th place, one lap down from the leaders. Marks has four MENCS starts and led his first lap in the series on Sunday.

Danica Patrick was the victim of a multi-car wreck on Lap 102 and finished in the 35th position. The race was Patrick’s last NASCAR event. She is scheduled to participate in the Indy 500 to bring her racing career to an end.