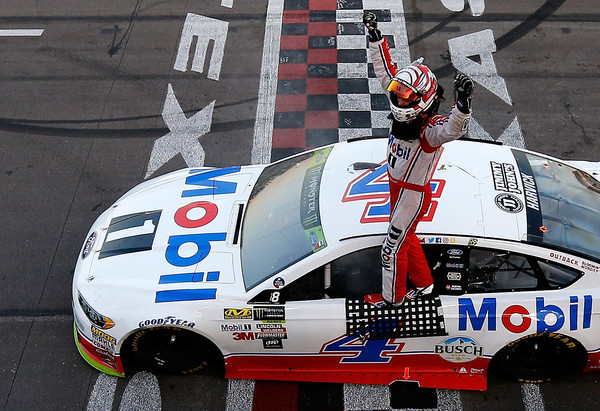 Kevin Harvick became “The Closer” once again for the second time this season, passing Martin Truex Jr. in the final laps at Texas Motor Speedway to earn his first career win at the 1.5-mile track.

Harvick’s 37th career victory guarantees him a chance to battle for the 2017 championship at Homestead in two weeks.

“This feels so good,” Harvick said, “We have been qualifying well here and racing well ever since I have been at Stewart-Haas Racing and just never got it to work out to go to Victory Lane. Today we had to earn it. To be able to pass the 78 car for the win is something that is huge for our confidence and team knowing we need to go to another 1.5 mile (track) at Homestead to race for the championship.”

Truex finished second after leading 107 of 334 laps, but the Furniture Row Racing driver still has reason to celebrate. Truex secured his way into the Championship 4 based on points, joining Harvick and Kyle Busch in the final round of the Monster Energy NASCAR Cup Series Playoffs.

“At the start of the race, our car wasn’t very good,” Truex said. “Track position was a big part of this race. We fought the car. We fought track position. We got the lead, led some laps. Ultimately, at the end, we weren’t as good as we needed to be to win.”

“A little disappointed to come up short, but to clinch a spot in Miami is unbelievable. Definitely got the job done today and came here and did what we needed to do.”

Matt Kenseth earned his first top-5 finish since Loudon in September, one day after saying that he will likely step away from Cup full-time at season’s end. He led 29 laps before finishing fourth.

Kyle Larson hit the wall and ended up in flames on Lap 282. The incident was the driver’s third weekend in a row which ended in finishes of 37th or worse.

Last week’s winner and Brad Keselowski were also faced with trouble on the first lap of the event. The two made contact and were forced to pit to access damages. Keselowski rebounded and finished fifth, while Busch had additional issues on Lap 275. He finished in the 19th position.

The Monster Energy NASCAR Cup Series head to Phoenix Raceway on Sunday, November 12th to set the field for the Championship 4.

Five different drivers (Keselowski, Hamlin, Blaney, Elliott, and Johnson) are left with only one spot available. Who will advance? Find out on November 12th at 2:30 p.m ET on the NBC Sports Network.

If there were any doubts about Jimmie Johnson’s winning ways before the O’Reilly Auto Parts 500, they were put to rest at Texas Motor Speedway.

Johnson earned his first win of the 2017 season after starting from the back. A spin in qualifying caused the Lowe’s Chevrolet team to change tires before making his 550th career start.

“I guess I remembered how to drive, and I guess this team remembered how to do it,” Johnson said. “I’m just real proud of this team. What a tough track and tough conditions. We were really in our wheelhouse and we were just able to execute all day.”

Johnson led twice for a total of 18 laps toward the 81st victory of his Monster Energy NASCAR Cup Series career. Johnson retook the lead on Lap 318 after a debris caution allowed for the No. 22 of Joey Logano to gamble.

Sunday’s race at Texas was the first since the repavement and reconfiguration that lowered the banking of the 1.5-mile track by four degrees.

Ryan Blaney finished 12th after a dominating performance that scored him two stage wins, but a mistake by the Wood Brothers Racing driver on pit road sent him rallying for positions.

“Not a bad day for us,” Blaney said, “It’s nice to win a couple segments, but I want to lead the last lap. That’s the lap I care about, but I thought we made a big gain today as a team.”

Blaney led a career-high of 148 laps before sliding through his pit box on Lap 301.

NASCAR returns to Bristol on April 23rd on FOX.